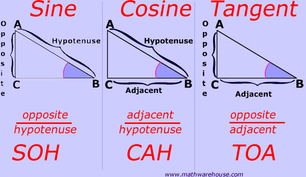 Sine
Sine is a trigonemtric feature that is equal to the ratio of the side opposite of a angle.
Sine was commenly used using a caculator to find a length on different shapes or
triangles and when use on a caculator would speed up the process.

Tangent
Tangent is a straight line that is touches a curved line or shape at a instance but cannot cross though the shape or curve.
The Tangent was commenly used when trying to find a direction of a certain point in between the structure I was working
with at the time. A Tangent will always have the same direction as the curve that the point is on. 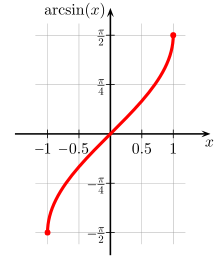 ArcSine
ArcSine is the inverse version of a sine function the only difference is formulas. Arcsine was used on a                majority of triangle angles and required alittle bit of information before plugging into a caculator or doing the formula. I am still alittle confused on how the "Arc" functions work although they are starting to make more sense as  Learn more about them.

ArcCosine
Arc Cosine is also the inverse version of the actual cosine function. Once again the only difference is formulas and of course
the way you are going to use it with different shapes and in a caculator or doing it on paper.

ArcTangent
Arc Tangent is similar like the rest of the Arc's its the inverse version of Tangent, and once again the only difference is how
you write the sin signs down. The tangent is asking you to find the inverse tan slope (y/x). The way I figure this out was after
learning about it in class I went and learned more about it on khan academy and that really helped me have a more
confident understanding of ArcTangent.

Law of Cosines
the law of cosines is the relationships of letters in between the triangle or whatever shape your using. In a case of a triangle there would
be multiple sets of different letters. The sets of letters have relationships together. There is also a formula to be used using these letters. I            remember using law of cosines a lot when you don't know where to start so you just start labeling around to find a start.

Finding points on the unit circle (at 30 degrees, 45 degrees and 60 degrees)
The way I learned is using the formula to find the right number for each section within the unit circle and then after that you would take the degrees          then find the side that is adjacent to the 30 degree angle, lets say it on the left therefore the corresponding side on the triangle on the right has to be       half that. This was a simple concept you needed to know to do functions. Using a unit circle although was not use for everything is was pretty useful         to know to continue with the rest of the functions.

Using the symmetry of a circle to find the remaining points on the unit circle
This was another concept that was hard for me to figure out but after awhile it became simplier and after some pratice you could do it
without a lot of mistakes it was just a matter of knowing what to do and to not forget any steps or the main formulas to figure
everything out.
​
Using the unit circle to define sine and cosine (of the angle theta)
Sine and Cosine can be used on a unit circle. Sine and Cosine are like functions on the Unit circle. First you draw a unit circle, centered with the origin and a radius of one. Separate the x and y axes into coordinate plane into four quarters. Then label the four quadrants. Then this means x = cos t and y = sin t. I had difficulty on this one and don't know the full way of doing it but I do know some parts of how to use a unit circle with sine and cosine so this was what I could think of.

Using similarity and proportions to derive the general trigonometric functions (sine, cosine and tangent)
All three of these trigonometric functions were pretty similar and once you learned the simple concept after that you learned about
each of the different trigonometry features and it was all down hill there. All you had to do was know the difference between all three and you
would be set although I did get confused from a lot of them after you figure them all out your good to go. All three of these were similar is some way.

Using the unit circle to define the arcSine, arcCosine and arcTangent functions
The unit circles are used a lot to describe what ArcSine, ArcCosine and ArcTagents are so its pretty obvious what they are used for thoughout
the community of trigonometry. The learning of each of these functions with unit circles was pretty easy once you learned how to use unit circles
because after that it just was a matter of figuring out different way of using these types of functions thoughout the unit circle.

Deriving the Law of Sines
Law of sines in trigonometry, is the equation relating to the lengths of the sides of a any shaped triangle to the sines of its angles. The law of       sines was used a lot in labeling and making things more organized and the formula was also used a lot to find points on a triangle. This was       used a lot throughout our worksheets.

Deriving the Law of Cosines
Law of Cosines is useful for finding the third side of a triangle. It was also very useful once again for labeling different section at the beginning of starting any triangle problem. The law of Cosines formula was pretty popular throughout the course and was used to solve different types of triangles like the SSS triangle. ​

The way we found the measurements, is taking a ruler and a printed out picture of High tech High, we used a ruler to measure each wall of High Tech High and converted the inches from the ruler into a more realistic measurements (feet) and than we measured it again to make sure we got all the measurements correctly. The formula's we used A*Tan(T)=O to find the height using the Tan Function and eventually find the volume. To find the volume we used all of the calculations we had and brought it together to find the total volume.

The project went well, although I think we should've had more time to create a presentation and more time to find the calculations because a lot of the time we had to work on this project at home which was hard to communicate to each other because everyone has their own agenda. A challenge was finding a formula for the measurements of the building. A Habits of a Mathematician that we used was collaborating and listening. Many of us were gone and not available all at the same time so we had to work. Something I would do differently is get the measurements done earlier and try to get in a group sooner. We would just be faster too the hard parts so we can get the easier parts done.
​