Introduction
​
An overview of my entire project would start with the beginning where I was trying to figure out what kind of game I wanted to create. So I first went to the drawing board and eventually joined Michael and Alex in a group to recreate a game called Thirty-One. We started to learn about Probability and what the probability was to get a certain number of the types of cards, I was mainly expecting to learn a lot about how much games have changed and how different things are now a days with card games as well as probability and of course the math portion of it about your chances and the risk you are taking while playing these games.

​            Once we figured out what kind of game that we wanted to create "Thirty-One" we needed to learn how the game worked. The game was all about probability or chance of getting a higher number than everyone else before someone else beats you to it. Each card had a certain number, for example the number cards had the number they presented and card such as, jack's ,king's ,queen's or ace's had their own special number. Once we played the game alittle bit we then eventually decided to recreate what the cards would look like back then and document them on card stock to show anyone that decided to check it out. The process over all was pretty fun and I think I learned a lot of different ways of finding the probability for something to happen.
Definitions
​ Probability is the chance that something will ikely happen to extent where is is probable. Observed Probability is what actually happend and caculating how the observation comes out. ​Theoretical Probablity is the probability in the favorable outcome so if you have a larger chance of something happening like flipping a coin 50 times and it end up as 60% tails most of the time, then it would be in favor on tails. The probability of muitiple events happening also can be shown as P(A or B) = P(A) + p(B) probability of muitple events is including every outcome you can get for whatever your trying to find the probability for. When you predict the value or expect the value to end up as. Two-way tables is another way to find out every outcome of something to happen except this time your using a table instead of a tree diagram or a formula. ​Tree Diagram are a more detailed way of finding the probability where you include every possibility but in a different format and you continue to expand the tree until every possibility is accounted for.   Joint Probability is the possibility of event y occuring at the sametime as event x. Marginal Probability is sorta like the two way table except its formatted alittle differently. You put all of your chances of something to happen in the table and end up adding them up to show the total number for the section. For example theres a probability someone cant see or someone can see but says they cant see and theres a probability of someone that can see and someone that can see but people dont think they can see.
​ 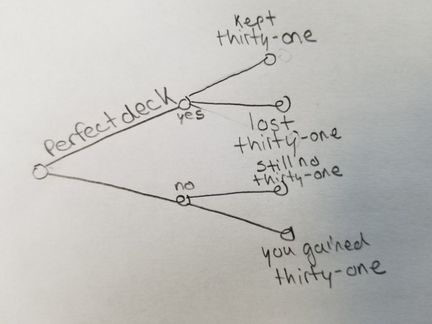 Calculations
So you have six possible outcome

Questions Two
Now alittle more difficult question. What is the possibility of getting a queen or a king in the 5 decks you draw at the beginning of the game
Now this will be similar to questions one except alittle more complicated.

Google Doc Link to all of the possilbe Outcomes
docs.google.com/document/d/19KMzldM560CaMKL1MP8qdJr5c7MsA-VJLZ1w30ww8yQ/edit?usp=sharing

There are 7776 outcomes and I didnt do this on my own instead I used a Combinations Caculator to find all of the
Possible Combinations you can get from getting a Queen or King including 4 other cards in your deck. Now your chances of getting a king of queen in
all of those numbers are huge and would take forever to count so instead Im going to estimate and say 3000 of the 7776 were queen's or kings. Now if 3000 of the cards were queens or kings that would mean the rest of the 4000 are Random Cards and your Outcome for how many kings of queens would be 3000/7776 38.5802469136% of getting a king or queen in your deck of course with that estimation. I was able to use Conjecture and Test to say what if the outcome is 3000 out of 7776 and used a specific number to find out the outcome of the total estimate percent. I started small and ended up with around 7776 outcomes. I also ended up using Describe and Articulate when creating the tree diagram.
Reflection
​
I quite enjoyed this project, is was one of my favorites projects this year. Playing old card games and learning about how they worked and how you find the probability or chance was intresting. At the beginning I did have trouble finding a game to do with my partners but we eventually figured out that we were gonna do a game called Thirty-one. Creating the recreations of renaissance cards games were enjoyable but they also took a good good chunk of time to create. It was amusing to learn on how the game worked and eventually playing it to over and over againn to get a better look on how the game works. I enjoyed presenting the game and just overall I think this was a great project and should be used again in the future.